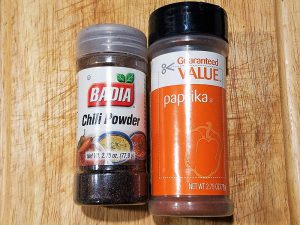 What is the difference between chili powder and paprika?

Can be a confusing ingredient when making recipes from other parts of the world.  In the US when we go into a grocery store and buy chili powder it is a spice mix usually containing ground chili pepper, cumin, oregano, garlic powder, and salt usually. It may be labelled Mexican chili powder.  How do you know if it’s a spice mix or actually ground chili’s? Look at the ingredients and you’ll see.  It would be very unusual for you to find anything other than a spice mix labeled as chili powder in US grocery stores unless you are in the international section.  Pay attention to the ingredients and you will know what you are buying.

It’s made from dried peppers that are ground and doesn’t contain other spices. Some recipes from other cultures and countries will call for chili powder but it isn’t the spice mix.  Instead it’s ground chili’s.  Likely the same as paprika but the variety of pepper could be different.  I researched this by going to a local Indian grocer and they didn’t have anything labeled chili powder for sale but they had paprika and according to them it’s the same.  They also had hot or red chili powder which is hot and closer to or maybe the same as a cayenne pepper.  The red chili powder is probably similar to hot paprika but it’s hard to know exactly which pepper they used.

There is more than one type of paprika but if a recipe calls for paprika you can expect it’s just regular paprika and nothing different.

When a recipe calls for chili powder how do you know which to use?  If it’s not 100% clear consider the recipe and where it originates.  Recipe from the US or Mexico? Probably chili powder otherwise they’d probably say paprika.  An Indian or East African dish?  They probably intend for you to use paprika.  You may find you prefer one over the other so don’t be afraid to try it both ways and see which you prefer.

What are common varieties of paprika?

I’ve seen mixes of these too and some from specific peppers though called chili powder instead for example ancho chili powder.